December 12, 2017
After hours of searching on Pinterest, I believed I had found the perfect potato soup recipe!   With the first freeze coming, I knew soup was going to be perfect for a family get together. What was even better was that we were going to the deer camp to meet my husband’s family for some serious family time together.
Finally, the day had come for potato soup!  My heart was set on it.  I had never made it before, but after reading all of the recipes and the comments from those who had tried them…I was sure I had a sure-fire recipe.

I read the first couple of steps and was all ready to start.  I had the bacon cooked (9 slices) and the potatoes already baked with the peel off and chopped into bite size pieces.  I had the butter cut up (11 tablespoons) ready to go into the Dutch oven/soup pot I had on the stove.  I went ahead and put the butter in the pot to start melting.  I was getting so excited…Time to add the flour.  The recipe called for 2/3 cup – stirring in 1/3 cup at a time with the butter.
Next was to add milk with a constant stirring to mix it all together.  I started with one cup….and then a second….Then, my phone battery died.  WTH!  Now what?  What was next?  I could have sworn it said 7 cups of milk.  I looked at the milk container and there is no way I had 7 cups left.
Time to improvise!  I added one cup of heavy cream…still stirring.  I checked my phone and I couldn’t even get the charger to attach to charge the phone.  (I was still stirring with one hand).  Oh what the heck, let’s add the potatoes.  I had chopped up the potatoes to bite size and then added them to the butter, milk, and cream concoction I had going on in the pot.  It seemed a bit thick, so I added a third cup of milk.
It still seemed so thick, but it smelled amazing already.   I knew I was going to have to make up the milk difference so I pulled some chicken stock out of the pantry and used a 32 ounce container.  Stirring constantly (to prevent the flour from burning), I added another 16 ounces of chicken stock (or half of another 32 ounce container).
Once blended, I added shredded cheese.  The recipe called for two different cheeses…I used what I had on hand: Mild Chedder and Colby Jack.  I took two giant handfuls of each cheese and slowly added it to melt into the soup.
I tasted it….and it wasn’t great.  It was missing so much.  I added salt and pepper.  Then I chopped up 6 slices of the bacon and added it to the pot.  Then I added 5 large spoons of the bacon grease from the pan I had just cooked the bacon in to the soup pot.  I also then pulled out garlic chives I had from the garden.  I took a large handful and chopped them up and added them to the soup pot.  I added another two large handfuls of cheese….
AMAZING!  It was thick and creamy and so cozy!  The perfect comfort food!

I shredded some extra cheese for garnish with the rest of the bacon and chives.
The whole process took less than 40 minutes!  This was very fast and super easy!  I had to share what amazing recipe had developed while my phone battery had died.
Everyone loved the soup and I had not one compliant!  I hope you have a great potato soup recipe.  If you do, please share below!  Let’s compare notes.  If you don’t, please try the one I shared.  Let me know how it goes with your family and friends.
–From my cabin to yours—

New Registrants will Receive a Coupon Code for 15% Off Their Next Purchase!

Sign Up For Our Exciting Quilting Newsletter & Get a Coupon Code for 15% Off Your Next Purchase!

Building Your Stash Back

Is It June Already?

3 Ideas to Get Motivated in May

Being Prepared…& a Quilter

Got the April Blues? 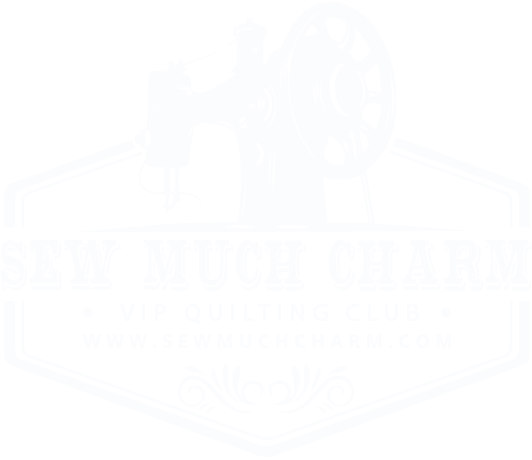 About Sew Much Charm

I make custom handmade quilts for clients and recently decided to learn how to sew garments for my little girls.  Watch my journey & learn from my mistakes.

You can follow Sew Much Charm on several social platforms. News, contests, block-of-the-month and special offers are announced on these platforms as well as this blog.

Be sure to sign up for our newsletter for even more great information and deals.